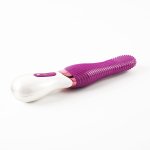 I rarely use any type of sex toys. It’s not because I’m ashamed of pleasure and sex, I think it’s because I’ve never found the right one for me. I see all these different types of toys and I’m a bit lost. The ones I’ve tried in the past were always just the same, vibrators that shake so bad, you feel like it’s going to dig a second hole in your vagina.

END_OF_DOCUMENT_TOKEN_TO_BE_REPLACED

A couple of weeks ago, I was having some thoughts about expanding my personal experiences with sex toys. As part of my brainstorm for an article that breaks down the stigma of sex toys for men and penis-owners. Since I had an interest in finding out first-hand, I seized the opportunity by trying out the Vibrating Prostate Massager by PALOQUETH. I’ll be honest, I was extremely nervous to try this out and went so far as to ask my wife to be there for my first time. But first, let’s look at the product.

END_OF_DOCUMENT_TOKEN_TO_BE_REPLACED

I really must say that the Paloqueth has been sending me some really great things since I began doing reviews of their products. Thus far, I have only reviewed personal masturbators for those who are penis-equipped(yeah, I’m going to be saying this more often now), but this is the first product I’ve gotten to try that is universally enjoyable. Let me start by saying I’ve used silicone cock rings in the past, to great disappointment, but the Vibrating Cock Ring by Paloqueth has managed to change my mind about them.

END_OF_DOCUMENT_TOKEN_TO_BE_REPLACED

This past week, I finally got a break from learning French after almost 3 months of daily classes. It’s been pretty bad trying to come up with any creative energy when you get burnt out by the afternoon, constantly translating what you hear in your head, then quickly responding with something grammatically appropriate. C’est fatiguant, câlice. So you can imagine how happy I was to find that the beginning of my week off and the delivery of the 2-in-1 Pocket Pussy Stroker Sleeve by PALOQUETH just happened to coincide.

END_OF_DOCUMENT_TOKEN_TO_BE_REPLACED

This review began when someone I follow on Twitter shared a tweet by Paloqueth offering free toys in exchange for a review. I had been considering trying to add toy reviews to my site for a while but assumed it would be years before I had a reputation or reach that companies might find viable. So, I saw this as my shot to dip a toe in the water, as it were. I know some of the bigger toy companies out there, and some of the smaller ones, but I hadn’t heard of Paloqueth until that day. Doing some research, I found that their site’s blog goes back only as far as January of 2018, but other records show the company has existed for as long as 2013.